Wow time really flies by so quickly. My precious little angel will be 6 years old this year. I found a meaning for my little boy’s name which I think describes him better than I could. Ethan means strong, optimistic, solid, enduring and permanent.

Ethan was born on the 17th July 2008 by emergency C-section. He was only 28 weeks. The doctors told me that he had a 50% chance of survival, a mother’s worst nightmare. That night Ethan lived up to his name. He pulled through but spent 35 days in NICU before he was allowed to go home.

Ethan has had a continuous battle with pneumonia from 6 weeks old. Very heart breaking for a new mom, who has no idea why this is happening. The reasons given were due to the fact that he was born premature and that his lungs were not fully developed. This was a 6 weekly occurrence and he would be in hospital for 5 to 10 days at a time.

This was his life for 4 years. The hospitals had become our second home and nobody could give us a reason or even a solution. We decided to move to Orkney to be close to my family and with that we gained a support system. Ethan was referred by his GP, Dr. A van Tonder, to a new pediatrician Dr. J Strauss, in Klerksdorp. Dr Strauss was wonderful and after being admitted for his third time for pneumonia while under his care, he started to do some further research. 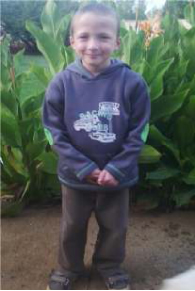 It was not until early 2012 that he brought me something to read, Hyper IgE Syndrome. He was convinced that this is what Ethan had. All Ethan’s symptoms and blood work pointed in this direction. He got in contact with a colleague of his who referred him to Dr. Monika Esser in Cape Town. Ethan was diagnosed on the 3rd September 2012 with Hyper IgE Syndrome.

After 4 years of not knowing what was wrong or why this was happening we now finally had an answer. We started him on maintenance therapy which consists of 5 medicines and vitamins daily. Not to mention the medication for his Eczema. This maintenance therapy is not covered by our medical and remains a financial challenge for us. Since Ethan was diagnosed he has had infections every 6 weeks but with the help of additional antibiotics and his wonderful doctors, we have kept the infections under control. He has however been in hospital 3 times since he was diagnosed.

This whole process has been tough on my family and very heartbreaking for his all his grandparents. Ethan and his sister have a special bond and it is really tough on her every time he goes to hospital. For me and my husband this has been a true test on our marriage and our family life. Life for us has changed in so many ways and all for the better.

My husband and I have considered Genetic testing for Ethan and have been in contact with a genetic doctor.

This unfortunately can only be done overseas as South Africa does not have the facilities to perform these tests. The tests are quite costly and range from USD 2500 to USD 2950 depending what test is to be done. We feel having this test done will put our minds at ease and Ethan will eventually have to have it done anyway.

We are also trying to educate ourselves, stay on top of new developments with regards to PID and educate our family members about PID in order for us to give Ethan a normal life as possible.

Ethan has been through a lot in his short little life. He is on medication daily, has speech and occupational therapy every second week and still does his school work daily with everything he has. He does not know what it feels like to be able to run without getting tired very quickly or to swim without getting sick 2 days later. He still has his good and bad days and he takes one day at a time. But this little boy has a mission in life and there is no way anything is going to stop him.